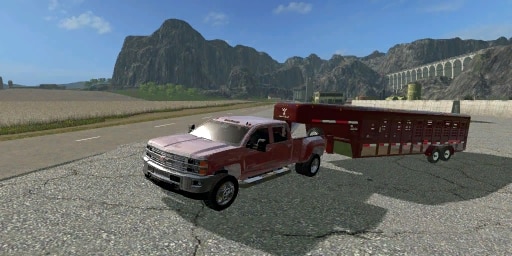 This awesome truck was made by Alagoas modding. I made it fillable and converted it for FS17.
It’s also washable, dyeable and has an illuminated dash. I added a choice of 6.6L Duramax Diesel with it’s own sound or 7.4L 454 with it’s own sound. There is a purchaseable fifth wheel hitch for gooseneck trailers only. You won’t be able to attach semi-trailers. The only bad thing are the headlights. They have a jagged edge that I can’t seem to get rid of. I deleted the old lights and imported brand new ones but they still have a jagged edge. Other than that, it is still the same great truck made by Alagoas modding. One of my favorite mods!