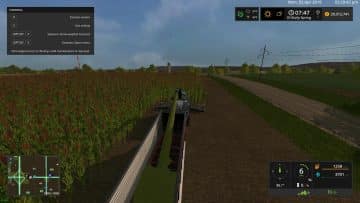 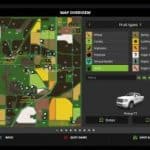 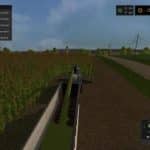 Added grass to 23 fields and along all streets and in and around buildings. To get this you will need to start new game.

version 5
You will need to start new game. Cotton has been added to wheat, barley, rape, maize, soybean, sunflower, potato, sugarbeet,
oat, corn2, sorghum(milo), sudangrass, alfalfa, clover, and now cotton. I have added FS17_AloeFrontladerTools to download 1 has
been edited to except the big cotton bales. select Round wraped
A lot of new projects to do on top of already a great map. You now will have 2 dairy farms and 2 pig
farms with there own cows and pigs. The second dairy farm lays strait south of main farm and the second pig farm lays to
norht. They are both show up on PDA map. I have added a Bio Food Factory that produces, cowFeed, pigFeed, sheepFeed, horseFeed,
and MPF(Milk Production Feed).MPF is power food for dairys. You still have distillersCorn, digestate1 for poweFood. I have
the production of Molasses. If you have the strawAddOn mod than you can get your molasses. Molasses can be sold at
the Safeway stores. All the different types of feed can be sold at all the Elevators. Next to the BioFood I have storage
silo for all feeds. I have a storage for molasses and fuel there too. I have a Cotton Factory so you can sell bale and
loose cotton there for a better price. You can dump other bales there. The Bio food and the Cotton Factory shows
on PDA. I have moved the poles at the main farm to give a more room to turn around. I moved pole in placeable area.
I added a clothes factory you can sell loose cotton and cotton bales is added to factory just as the loose cotton.
Across the street you can sell clothes at the Dollar General store. The cow2 and pig2 can not be transported by train
at this time and cannot put them in holding pens yet. Added pallet factory and sawmill that produces boards for pallet
factory. Across the way is the sell point for boards and pallets.
This is the Revised 4.0 version I have added back the crops. wheat, barley, rape, potatoes, sugarBeets, sugarcane, maize, sunflower, soybean, corn2, milo, and oats.
I have fix the straw in pig and cow areas and I could not find the egg sell points so I added them to safeway stores.
In version 3 replaced the download to have the issues fix so if you need to have those fixed, just re download and you will be good to go. It wasn’t enough to warrant a re post.

Version 3: Courseplay now working, strawHarvestAddon compatable, alfalfa and clover added back to storage, sell points, fermenters and silos.
helio port fix placeable next to main farm. Fields was 81 now 79. Added forage mixer, Pig food uses corn, corn2, soybean, milo, wheat, and oats.
This map is a map for farmers, you can only farm and raise livestock
The map is a Mills County reinvented. I have turn the map 90 degrees, now the interstate runs North to South or South to North depends on which end you start from. I have edited the map somewhat like the FS17_Tazewell_County. I have only the crops, wheat, corn, milo, sudangrass, corn2, soybean, and oat. It set up just like we have planted in this area. The storage and sell points only except those crop. I have only those crops show up in the crops that the fields that are buyable. I have decided not to have clover and alfalfa in this map because at this point I’m not able to get everything I wanted to happen with 2 crops. I have added to the sheep more types of feed to be able to feed to them, You can feed corn, corn2, milo, silage, chaff, distillerCorn, and digestate1. Since most of the crops that make the TMR and pig food have been removed from list of crops. I put in the distillersCorn and digestate1 for powerFoods, You will be able to feed to cows, pigs, and sheep. I have put in mod Train in map now you won’t have to mess with game files. It works the same as before when you have the train in game folder. Each map can have a different locomotive and it doesn’t effect the mp. I have the train to transport the livestock to holding pens close to butchery. In all the map is a lot different than it was and still with rolling hills. It is seasons ready
Multi angle terrian. GMKFC_Mod ChoppedStraw added in map The mods you can make game better FS17_CS_DirectSeedingAddon,FS17_Kalk_BigBag, FS17_RM_Seasons mods